Binney Bincent The place was packed with irritated and salty, wet bodies. There was barely enough open space to breathe. I was very lucky to have scored an end seat several hours earlier. I always try for the end seat to minimize public contact. As I was sweating and waiting uncomfortably in a hard, sticky plastic seat, this proudly over fed Cuban guy unrolled something in tinfoil. He was jammed into the seat right next to me and he started eating a greasy pork sandwich; a Media Noche to be exact. He kept wiping pools of oil from his face with his hands. No napkin, just hands. I couldn't stop looking as he then rubbed his buttery paws on his legs.   The smell of the Cuban eating a Cuban was confusing me. Was I hungry or sick? He finished the meal and then stared at his empty, shinny hands. He started to attempt to stand up, but his bulgy legs were trapped by the arms of the seat. As if he had Mission Impossible Tom Cruise foresight, the grease on his legs kicked in and a
1 comment
Read more
September 19, 2018
Scooter The pounding wouldn’t stop. Bang bang bang. Who the fuck was down stairs at my door. I was still drunk, it was around 8:30 AM, I was naked in bed and I was pissed of someone was ruining my sleep.  I was deep drunk sleeping. The kind of sleeping that you wake up well after noon and then go back to sleep for another two hours. It was winter break and I had a six hour drive home. I was in no condition to drive. I needed sleep.  The banging at my front door would not stop.  I was trying to wait it out. I concentrated my energy and repeated a mantra, “I’m not here. I’m not here.” The banging was relentless. Shit, what the fuck, I thought. Go away! The door couldn’t hold up much longer. I couldn’t imagine who the hell could have the kind of energy to keep up that much banging. They must have been in amazing shape. I wrapped the sheet around my waist and slowly heading down the stairs using the wall for support. I tried screaming, “hold on” to the loud pounding at the door
1 comment
Read more
September 14, 2018 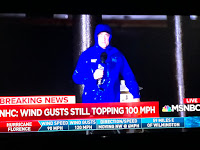 Storms Hurricane Florence was a category 4 and was on a path to destroy the Carolinas. It was huge. Trump suggested it could be the biggest storm ever. He said, " It’s tremendously big and tremendously wet." That's a weird statement and it was almost pornographic. Who would confuse a storm and porn. Trump. It was Thursday night, all of the channels had non-stop storm coverage. The momentum should have been building, but the storm was loosing steam. It was dying, almost defiantly to prove Trump wrong. Florence, a female storm, refused to be the biggest, wettest, hottest storm ever.  Weather news casters spend eight months of the year totally bored. During a typical show, it might get a little exciting and they say, "thunder storms are 50-50 for tomorrow" or "this weekend will be the hottest days on record." They try hard to make snowy days scary, but they never are. Eight months of the year the weather guys and gals are sleep walking through the
2 comments
Read more
September 05, 2018
The Big Toe Bizzy D, the kids and I were heading to my father and mother-in-law’s condo in Aventura. They recently arrived in town from Israel and we wanted to take them out to a new spot for dinner, a place we knew they would really enjoy. Bizzy D raved to them how so many of our friends loved-loved this place and always ordered take-in from there on the holidays. And even better, it was Kosher. Deb assured them that they had the most amazing food. “Just wait until you have their Nova,” Deb said over the phone. “It’s the best. The best.”  My father-in-law is Nisan and his wife is Hana, but I call her the Big Toe. The name Big Toe was born as it slipped out of my mouth during my thank you speech at my wedding.   Bizzy D and I were at the head of a giant round dinner table seating all 36 guests, I went around the room and individually thanked each guest one at a time. It was spontaneously charming. I had something funny and something warm to say about each guest. It was going
1 comment
Read more
More posts